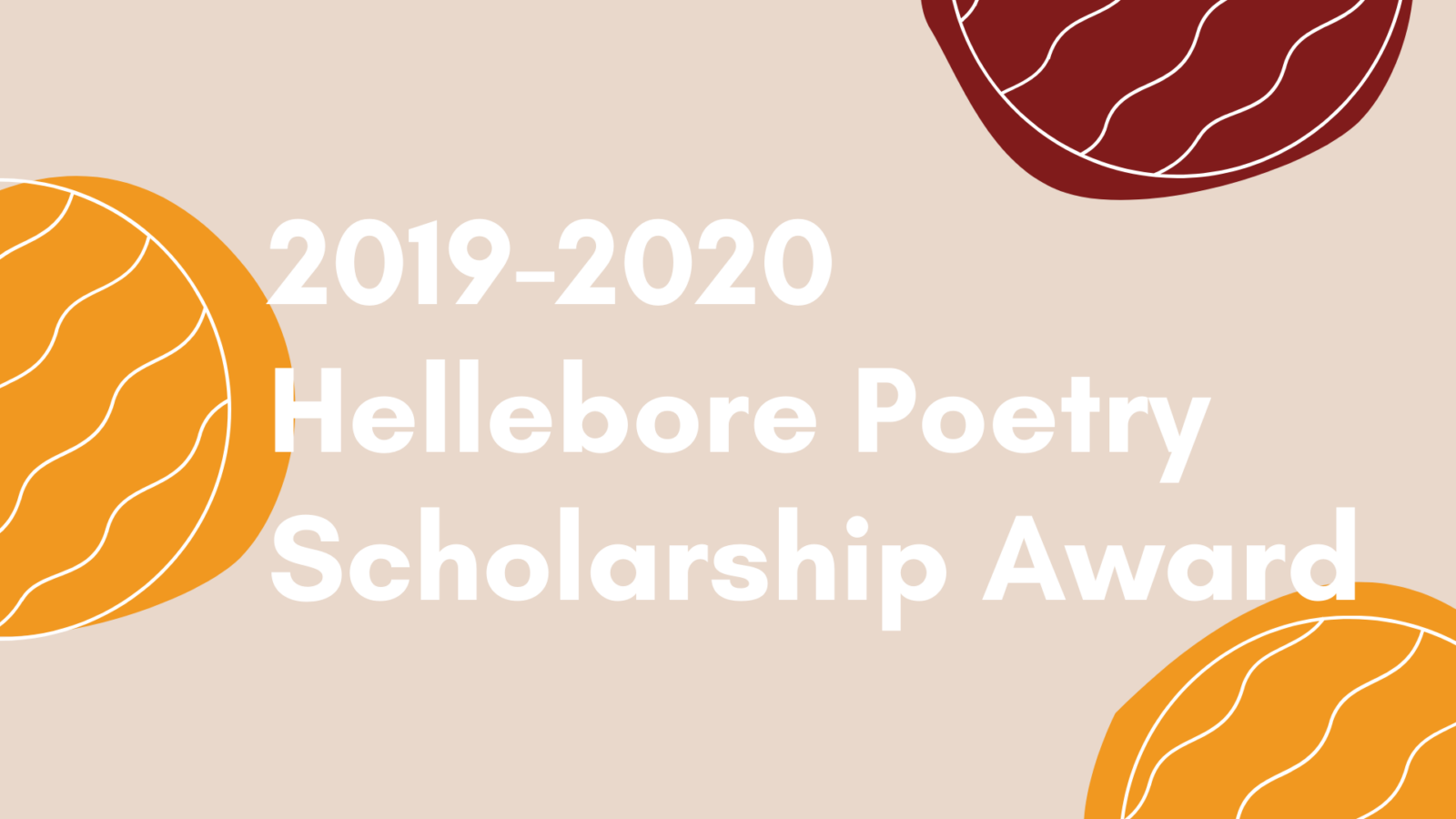 The Hellebore Press is excited to announce the 2019-2020 Poetry Scholarship Award Honorees, selected by guest judge and author, José Olivarez.

Please join us in congratulating:

We’d like to give a warm and sincere thanks to José Olivarez. We greatly admire his dedication, precision, and compassion throughout this process.

We’d also like to offer our gratitude to all who submitted their work. You are at the heart of what we do.

And of course, we are so incredibly humbled by our honorees, Michael Akuchie and Neha Maqsood.

The poems in “Wreck” attempt to fill an existential void by documenting a select catalogue of experiences in my life. These experiences range from my childhood to adolescence to young adulthood. I have never come so close to spirituality and the belief in a deity in the sky as I have when I wrote these poems. There are a legion of factors that dwindle one’s belief.

Wreck features sharp language and images and a reaching towards God that filled me with wonder and spiritual fulfillment. The poems are excellently crafted and each one sings.

Neha Maqsood is a Pakistani journalist whose writing on race, religion, Indo-Pak relations, and global feminism has been published in Metro UK, Express Tribune, Foreign Policy, Women Under Siege and other places.
Her poetry, too, has been featured or is forthcoming in over 20 literary journals and magazines, including Strange Horizons, Gutter Magazine, Marble Poetry, Abridged and more. In 2019, she was the recipient of the Black Bough Readers Award for Poetry.

For her efforts in tackling racism and Islamophobia in Britain, she was featured in the 100 Bristol BME Powerlist and Rife Magazines’ 24 Under 24 List for 2019. She starred in the 2018 film, Sisters in Arms, which premiered at multiple international film festivals in Toronto, Los Angeles, London, Galway, and other cities. To follow her venture into journalism, you can visit her website.

In the current state of the world, my identity has inadvertently become something I dwell on more often than is needed. How have the experiences, challenges and moments I faced in life different for a Pakistani-Muslim woman of colour?

Making poetry political was never my aim and that’s why in this manuscript you’ll read certain poems which seem otherworldly. Some poems were written under the influence of sleeping pills (Not recommended!) whilst others were written during depressive episodes and or whilst reading the Koran. However, it seemed that poems eventually do get political at times – how can they not? To not remain abreast of the political climate or the worlds system is a privilege I cannot afford, and poetry provides a way out of that.

The larger theme of Vulnerability, is about identity – it’s about race, confusion, being atypical, being a Muslim woman/brown woman, feeling low – it’s a journey through the years.

These poems felt intimate to me in their portrayal of the diaspora. But there is an undercutting and questioning in these poems that I love; there’s an understanding of diaspora writing and narratives and a willingness to engage with tradition.

José Olivarez is the son of Mexican immigrants and the author of the book of poems, Citizen Illegal, a finalist for the prestigious PEN/Jean Stein Book Award. In 2018, he was awarded the first annual Author and Artist in Justice Award from the Phillips Brooks House Association.

Along with Felicia Chavez and Willie Perdomo, he is co-editing the forthcoming anthology, The BreakBeat Poets Vol. 4: LatiNEXT. He is the co-host of the poetry podcast, The Poetry Gods and a recipient of fellowships from CantoMundo, Poets House, the Bronx Council on the Arts, & the Conversation Literary Festival.

José is a master teaching artist. In 2017-2018, he was the Lead Teaching Artist for the Teen Lab Program at the Art Institute in Chicago, IL. In the past, he has led writing workshops & diversity trainings for institutions such as The Lincoln Center, The Metropolitan Museum of Art, Studio Museum of Harlem, The Adirondack Center for Writing, Inside Out Literary Arts, & many more community organizations & universities.

A recipient of the 2019 Ruth Lilly & Dorothy Sargent Rosenberg Poetry Fellowship from the Poetry Foundation, his work has been featured in The New York Times, The Paris Review, Chicago Magazine & elsewhere.

Thank you for supporting The Hellebore Press!