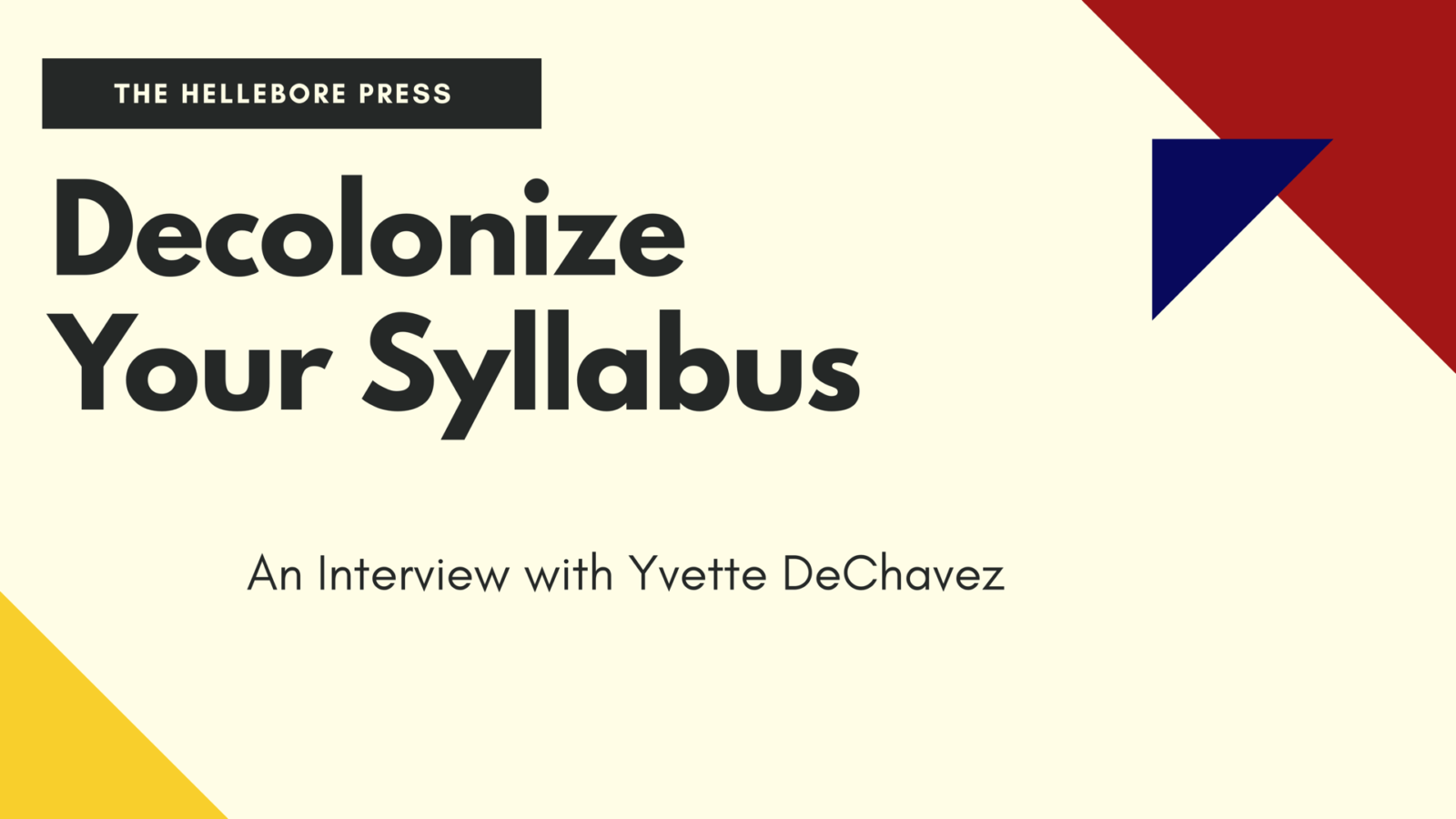 Yvette DeChavez, PhD, is a writer, artist, and scholar that hails from San Antonio, Texas. She is a first generation college graduate and studied Indigenous Americans and People of Color. In addition to her contributions within academia and media, Yvette DeChavez advocates for mental health.

In 2018, Yvette DeChavez utilized her platform to call attention to the lack of representation in college level English classes. In an article published by the Los Angeles Times, DeChavez demanded college campuses, universities, and individuals nationwide to:

In this current climate, many voices and experiences are silenced. Unfortunately, that extends to spaces that were once deemed as safe.  How is academia changing? How has that affected your role as an educator?

When I returned to the classroom two days after the (2016) election, the tension was palpable. I was TAing for an American Lit class at the time, and I could tell that the professor (a liberal white guy) was uncomfortable and unsure of how to address the elephant in the room. On one hand, there were students who’d voted for Trump. On the other, we had queer students, undocumented students, students wearing “Fuck Trump” shirts, all of whom were seething with anger. I knew things were going to be intense after that, and that I would have to decide how I was going to approach this as an educator—would I stay quiet so as to not ruffle feathers, or would I stand up for what I believe in, which is that aligning yourself with Trump is aligning yourself with the denial of basic human rights and dignity? I knew that if I chose the path of least resistance, I’d be doing a disservice to the students whose lives and voices were at risk. I choose to teach resistance. Not everyone is doing the same thing, but there are plenty of us who are out there doing this work and doing it loud.

In what ways do you think, students, faculty, and administration alike, can contribute to an inclusive and equitable environment with education?

I think the entire institution sees white as the default, because the institution itself is largely made up of white people. The higher you go, the whiter it gets. (Hey, they don’t call it the Ivory Tower for nothing.) I think it would require a process of unlearning, rethinking, and listening to BIPOCs as they try to explain why things feel so unwelcoming and hostile. I think faculty and administration are in a position of power, which means it’s up to them to do the work of making themselves better, of holding themselves accountable. Read books! Read the internet! The tools are everywhere and absolutely available—it’s up to them to make use of them. Additionally, there are tons of academics of color who are doing the work of decolonizing and diversifying. Hire us! Hire us for teaching positions, hire us to speak to faculty and administration, hire us to host workshops.

How have you used your platform to challenge prejudice and discrimination within academia?

As a literature instructor, one of the most important aspects of my job is teaching critical thinking skills. Critical thinking and challenging prejudice and discrimination go hand-in-hand. So basically, it’s my job to use my platform in this way. Obviously, not everyone sees it this way, but I do.

What situation sparked the #DecolonizeYourSyllabus initiative? What conversations and actions do you hope to spark because of this initiative?

Last year I held a postdoc position and, just before classes began, I received an email from a professor with some power in the department who decided that the reading list for my American Novel class was too “ethnic” and that I needed to add white men to the syllabus, particularly because it was an American Lit class and not an “Ethnic American” lit class, as they phrased it. They also added that it would make me look better on the job market.

I was, of course, pretty upset about the entire thing. But I also knew that my postdoc was only a year long, and that after it I planned to take a break from academia and reconsider whether or not I even belonged there. So, to be quite honest, I thought “To hell with this, I’m going to teach what I want,” because I wasn’t sure I’d ever get the opportunity to do so again. I removed the only novel by a cishet white woman on the list and replaced it with a text by another WOC, and I made it a point to begin the semester by explaining to my students that the list in front of them was one I chose on purpose, with intention.

It’s no secret that most of us spend our years in higher education reading text after text by white men, and look at where that’s gotten us. It becomes the only perspective we’re given and it starts to feel like the only one that matters. I believe that this is detrimental to students: white students never have to consider the perspectives of indigenous and POC Americans; indigenous and POC students feel like their perspectives aren’t important. The cycle goes on and on and on—we reinforce and perpetuate the system.

I also want to add—and this is really important to point out—this is a radical call for change. I’m not saying “DIVERSIFY your syllabus,” I’m saying “DECOLONIZE.” And that’s the part that upsets a lot of people. Yes, I actually mean that, in order to truly shake shit up, you should primarily teach indigenous and POC texts. I’m not calling for people to sprinkle in more works by indigenous and POC writers; I’m calling for them to make these voices the dominant ones in their classroom.

Some people try to say things like “Well, you know it’s impossible to change things from inside the institution, right?” And sure, I get that. But at the same time, shouldn’t we try? What is the alternative when right now this is the system under which we operate? For me, decolonizing your syllabus is a step towards something good, something better. I hope that it shakes shit up and allows students and professors to push against whiteness as the default, whiteness as the norm.

Eventually, I also hope that it means we move entirely away from Western and colonial ways of thinking.

How can the English Department across universities nationwide create a literary canon that represents the students they teach?

The canon is a funky thing, right? I mean it’s constantly evolving and the concept itself is feels a little outdated to me, particularly given the way the internet is changing how we access works. I’m not sure how I feel about the concept of the canon anymore. I mean, I do think Toni Morrison is One of the Greats, but have you ever read Kiese Laymon? How about Yesika Salgado, who really got her career going thanks to social media? Their work is changing people’s lives, and I doubt most would consider them canonical. The thing is, I can pretty much guarantee you that what I consider canonical will be quite different than what my white male advisors would include, or even what someone who shares my interests might believe.

Am I saying fuck the canon? I don’t know—maybe. Probably. Yeah, I think so. If anything, I think we should really be thinking about how white professors are going to do the work of finding materials by indigenous and POC writers rather than insisting we all read The Old Man and the Sea. I can’t tell you how many times I’ve had white instructors be like “Hey Yvette, I’m teaching Mexican American literature this semester. Can you give me some books to put on my syllabus?” Hold up—you want me to just give you all the work I’ve put all my time into finding? Pay me, dude. And that’s just it: Pay us for our extra labor. Everyone wants to diversify but no one wants to put in the work or pay people to do the work for them.

Also, for the record, I’ve never read Moby Dick, and I have no shame admitting that.

Do you have any literature or poetry recommendations for our readers? How have these works influenced you?

Jesmyn Ward’s Salvage the Bones: This book hurts. It’s about Esch Batiste, a pregnant fifteen-year-old girl who is growing up without her mother in Mississippi. The bulk of the novel takes place in the days before Hurricane Katrina hits, as Esch and father and brothers prepare for the storm and Esch comes to face the fact that she will be a mother. I’ve read this book four? five? times (I wrote about it for my dissertation), and it gets more painful every time. But damn, it’s something you have to read.

Kiese Laymon’s Long Division: This one is about a smart-ass kid named Citoyen, who is also growing up in Mississippi. It’s a trippy book that’s part sci-fi, part coming-of-age, part Afrofuturism, and it totally changed the way I think about time and anti-Blackness in America.

Yvette DeChavez is a Latinx writer, artist, and activist from San Antonio, Texas. She earned a PhD in Literature from the University of Texas at Austin, where she also taught classes in contemporary American literature and Mexican American culture. Her work focuses on centering the voices, narratives, and performances of BIPOC. She is also a mental health advocate who speaks openly about her experiences with depression and anxiety in hopes of normalizing such conversations. Before earning a PhD in literature, she worked for the Macondo Foundation, a nonprofit organization that brings together writers committed to social change. You can find her on Instagram @yvettedontlie. For “Decolonize Your Syllabus” shirts, visit her website: www.yvettedechavez.com.

1 thought on “Decolonize Your Syllabus: An Interview with Yvette DeChavez”