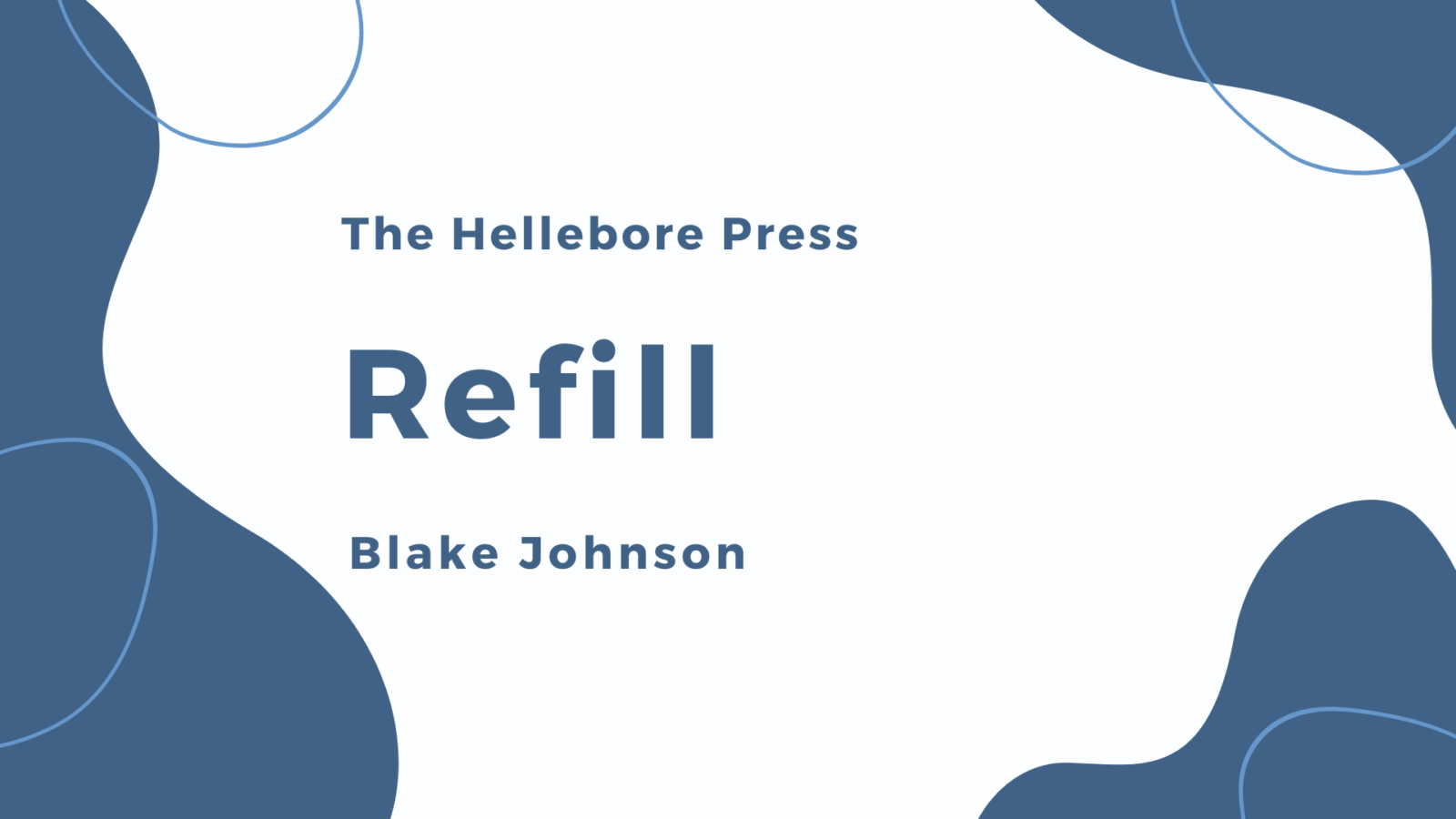 According to a psychiatrist I saw when I was seventeen and had not yet contemplated suicide, only dying in general, I was not depressed. Or at least not as depressed as he hoped I’d be. We talked for a half-hour. He asked me to describe a woman I’d like to take to bed, and when I stuttered, he implied I was a virgin. I showed him my scabbed over knuckles, hoping he’d back off, and he explained how my aggressive tendencies were linked to a repressed libido. He asked me if I had ever told my old man to go fuck himself. He smirked at me as if I was a wind-up toy he’d love to see walk across his desk until it fell over the edge.

He prescribed me pills. I never saw him again.

The pills remained. They’ve been in my system for a little over a decade now, long enough that I can’t remember what life was like before them. There must have been some change, though, some sort of slow growth into who my mother dreamed I would be, the man I was destined to never become.

Otherwise, what’s the point of these white walls and plastic chairs and outdated magazines? What am I doing here?

When I drifted and stole and subsisted, when I lied to loved ones about my pursuit of employment and stability, the question emerged as a whisper. And now that I have stumbled into work despite my intent, there is no conversation to drown out the question—it cries out with each blurred day and meager paycheck. It roars.

Still, there is one good thing about working again: insurance. There were ways of getting the meds cheap, but the meds weren’t the problem. It was the doctors. It was always the doctors. They demanded follow-up visits every three months, an exercise which required one-hundred or two-hundred dollars in exchange for an hour of waiting and ten minutes of inane chit-chat. Those crescent smiles. That epidermal positivity. Of course I mistrusted them. In their presence I exhaled white lies while constantly aware of the fact my existence was cradled in their latex covered hands. Turn and cough and beg for mercy.

Despite their power over life and well-being, I had learned how to hold them back. Before the job, I was a craftsman of sorts. The pill cutter had cost me two bucks and had saved me hundreds. It took guesswork at first, knowing whether to halve a pill or quarter it. Just enough to stave off the nausea, the dizziness, the electric current which pulsed from the center of my brain outward, just enough was all I needed. It was a strange bargain between diseased mind and drug dependent body; the side effects of the cure and symptoms of the disease melded into something gruesome and bloody, and the horror was that you could not separate one from the other without potentially murdering the host.

Now there is no need for these strange economics.

I run my fingers across the insurance card’s glossy finish. My name, my full name, is printed on it in bold letters. This somehow lends it a certain weight. It’s like I exist somewhere else, in a place far from here, where my need has been noted and my need will be met.

But then the receptionist calls my name. My hands shake. The insurance card clatters to the floor. My brain turns on its side and wails like a starving infant, and I feel foolish for not noticing it earlier. I had heard this woman’s voice before, and it had doubled my anxiety about setting foot in this ridiculous place.

I can’t handle phones—not for their intended use. The disembodied voices of strangers slide straight through my ear and barrage my fried synapses until all that remains is a collection of random sounds that mean nothing at all. The noise burns. The language barrier rises.

The desperate phobic must seek out other options. Scheduling an appointment online seemed harmless, safe even. In the solitude of the digital ether, you could take your time dispensing information. You could even take deep breaths without someone thinking you’re insane or perverted or both. So that’s what I did.

I got a call anyway.

The ghost-voice asked me my name; I told her.

“Reason for the appointment?” she said.

“I just need my prescriptions refilled.”

I tried to tell her, I really did, but she cut me off before I could finish.

“Painkillers?” she said. It seemed more like a statement than a question. I wanted to swallow my own tongue. I wanted to choke on it.

“We’re no longer prescribing painkillers after the twenty-fifth.”

“I’m depressed,” I blurted out. “They’re for depression and anxiety.”

She confirmed my appointment, then hung up.

I had hoped to never put a face to the ghost-voice, but there she is, waiting for me with a dazed look on her face. It’s almost as if calling out the names of strangers all day has made her a stranger to herself. Her voice grates out monosyllable questions—I watch her pound her keyboard with manicured fingers, and I wonder what secret pain she holds behind that blank stare and how she’d feel if I reached down her throat and pulled it out for all to see. She’d know me then. We’d understand each other. I’d no longer hate her.

“The doctor will see you shortly.”

I look at her a long moment before taking my seat, trying to measure her concept of time against my own. I am a single clenched muscle, trapped in the infinite minute. I am the battleground of death-bound cells rebelling against the throes of decomposition. And with each name called that is not my own, I become more aware of the war and how I have no say in its outcome, and how this invalidates the present moment, and how I ought to leave this place and never return.

All thoughts of escape cease when my name is called a second time; I am caught on the leash of what is expected. I find myself in an exam room with a medical assistant who is lovely and looks through me like glass. The questions she asks are familiar—they’re the same one’s the psychiatrist asked me all of those years ago, the answers of which he used to determine I was not as depressed as I believed I was. Answer on a scale from one to five, one being none of the time, five being every single moment of every single day.

Do you feel hopeless? (Yes.)

Do you feel like you are a burden on your friends and family? (Always.)

Do you wish you had never been born? (Every time I blow out the candles.)

Tell me, how could I have been honest with a man who seemed to reduce me to a dollar store trinket with his assumptions about where I had been and what I had done? How could I share my reality with this woman who was angelic and incapable of looking me in the eye? Three, three, three.

She leaves. I miss her immediately. She wasn’t unkind, and it felt good to look at someone beautiful, to know that beauty existed somewhere even if it would never exist in me. Twenty minutes later, there is a knock on the door. My new doctor enters. I hold back tears.

His smile is a beaming crescent; his teeth glimmer under the fluorescent lights. He talks about diet and exercise and Vitamin D. He asks me what I do for a living, and a wave of relief washes over me because for the first time in a long time, I have an answer. He pretends to be impressed. He wants blood work done. I don’t understand why, but I don’t question it. Either the room is getting smaller or the doctor is getting larger, and I have to grip the sides of my chair to keep from running away. He fills my prescriptions.

All of that, I think. All of that for ten minutes.

I flee to the waiting room, toward the exit, tripping over my own feet. How silly, I think as I fall to the floor. How bizarre this has all become! On the heels of absurdity there are thoughts of trying what I had never dared try. I feel a hand on my shoulder. I turn—she’s a middle aged woman, a patient like me.

I see my mother in this woman, in a tired smile that begs me to carry on. I shut my eyes and hold my breath and try to imagine what that might be like, to live as if everlasting. I try—I can’t see it, but I try. I’ll still be trying in the years to come.

Blake writes a lot of fiction. Sometimes he eats and sleeps, too. He’s beyond excited that his novella, Prodigal: An American Parable, will be released on November 10th of this year by Trouble Department. You can often find him hanging out in the Twitterverse under the handle @bjohnsonauthor, and you can check out more of his stories on bjohnsonauthor.wordpress.com.