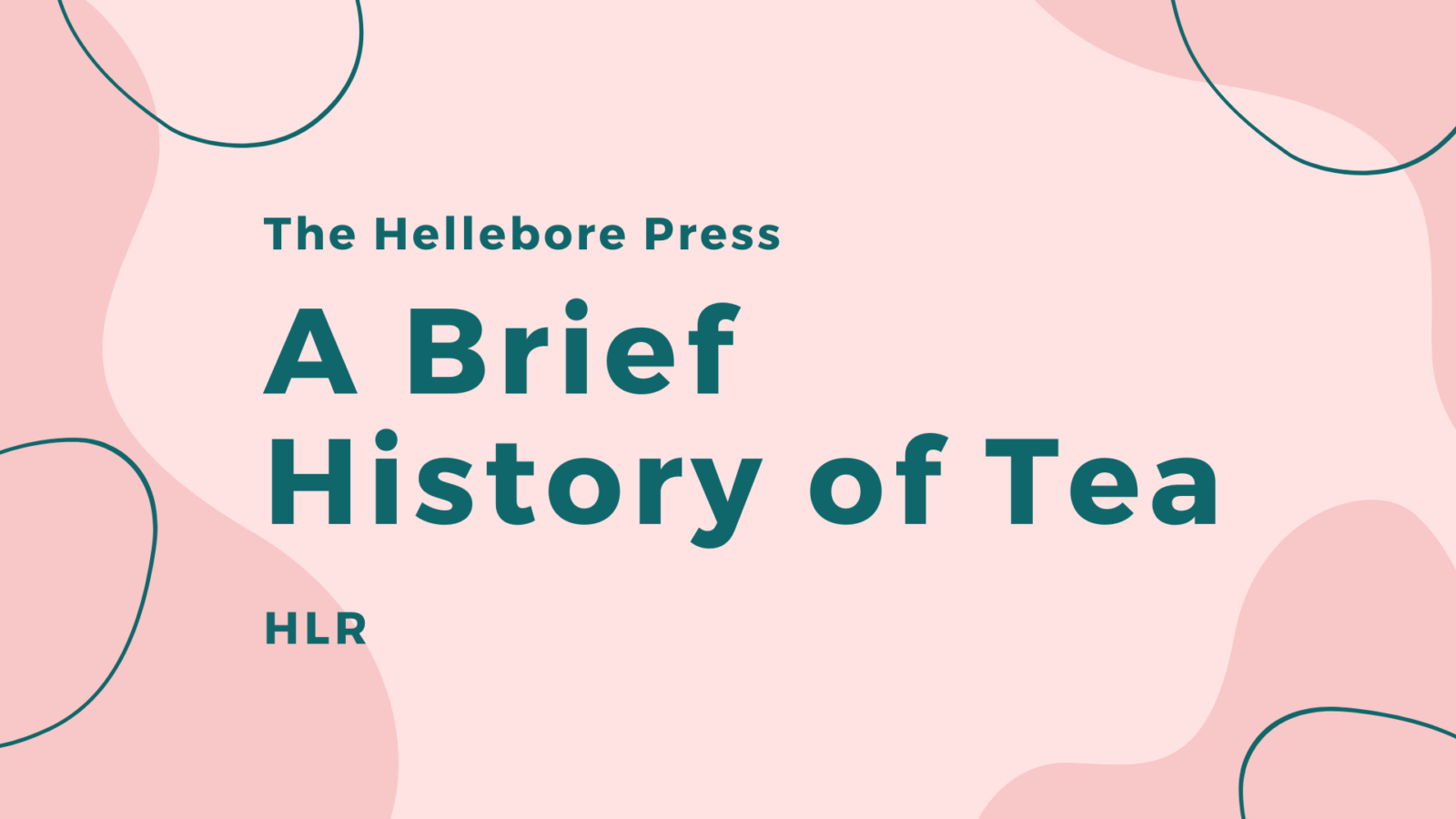 I used to resent making my father cups of tea. “Why can’t you just make it yourself?” He’d just stare at me until I skulked off to the kitchen, dragging my feet, banging the mug down on the counter, slamming the fridge door. A simple task but apparently asking too much of me.

When I was a teenager, a cup of tea and a spliff was the only way to start the day. Life could not move forward until tea had been consumed. Tea first, life second. Get your priorities straight, girl. Always tea first. Always tea. Always.

My first poem published in print was about a young girl who was addicted to tea and died as a result of her dependence on caffeine mixed with a disgusting amount of sugar. Addiction, death and tea: a portrait of my family. Nobody knew at the time that this morbid poem, written and published when I was 10 years old, was the start of my career writing depressing poetry.

A red flag: All these years and you still don’t know how I take my tea.

When I was 16 I went to the dark side. Depression and psychosis were killing me from the inside out. Feeling so exhausted from the fight and zombie-like thanks to citalopram, while also knowing that I needed to do every single nonsensical thing my mind was telling me do, I found myself trying to find energy from any possible source. Crushed caffeine pills mixed in rum and gumming speed wasn’t enough, so I decided to start drinking coffee.

I’d always said that I hated the taste of coffee but in truth, I had never tried it. I had a pal who’d dropped out of school and started working in this failing coffee shop. I’d pop in to see him and down espressos until either my hands were shaking too much or they’d stopped shaking altogether, then rush off to do whatever mad thing my brain told me was imperative to do next. “If you don’t run 8 miles to this specific post-box and kick it with all your might using your left foot, your dad is going to die. Tick tock.”

I still don’t even know if I truly like the taste, but nowadays coffee is more vital to my existence than tea. This somehow seems sinful, anti-British, maybe even anti-Dad. Father said that he drank a coffee in Rome in the 90s and it was ludicrously expensive. He never drank a coffee again, and never understood why I did, when tea was clearly far superior.

Sometimes, when he was too ill to speak,
he would make a letter T shape
with his hands. That meant, “Tea, please.”

My first suicide attempt. Brother said We need to get her to hospital, I’m calling 999. Mother said Absolutely not, and confiscated the telephone. I was put on the sofa. I remember my head hanging over the edge, upside down, and my left arm lolling with it, my hand near the carpet. My organs were in my mouth. Mother said Drink this tea. I can’t speak I can’t I can’t I can’t I can’t keep my eyes open. Mother is ironing and watching Desperate Housewives while I am dying behind her. When I was conscious, I could see the cup of tea on the floor by where my hands were hanging. When my eyes rolled back into my head, they retained the image of the tea. Dark green mug, white leaves, flecks of gold. I couldn’t move to get it. When I was unconscious for too long, Mother poured cold water on me. Drink your tea, she said. Brother was not allowed in the room. I drifted, in and out, mostly out. The tea went undrunk. Eventually my whole body slipped off the sofa. I came to, drenched, lying on the floor, to the sound of Mother shouting at me and Brother crying, Why aren’t you helping her? in the hallway. I had wasted a valuable cup of tea. I slept for 3 days and the attempt was never mentioned again.

Me + D @ university:
Tetley when our student loans dropped.
Green tea when studying, using the same teabag 3 or 4 times.
With lemon if I’d managed to swipe one from Tesco.
Chamomile when we were depressed or had period pains. Hot water when we were skint.

Mother had black tea. Brother and I had milk and 2 sugars. Father drank several cups in the morning while waiting for the pub to open. Running out of tea caused the entire household to fall apart. We learned to fear the empty PG Tips box. Life simply could not go on without tea. A frantic scrambling for loose change and sending one of the kids running down to Mr Shah’s would ensue. Then the parents would get their tea and the (albeit very low level of) order that existed in our household would return.

Today, I am the queen of tea-making. I remember how everybody takes theirs and make them perfectly to their individual specifications. I like seeing their faces when they take the mug and peer in, nod in approval, take a sip and say, “Corrrrr, that’s a lovely cuppa tea, that is,” and they are simply happy. It’s so British it hurts.

When I began making cups of tea for my father, I was about 4. Too tiny to reach the kitchen counter, let alone the kettle. Had to drag the red plastic step over and climb on it. If there was too much water in the kettle it was too heavy to hold so I’d tip it over into the sink and refill it with just enough for a cup. Four heaped teaspoons of sugar. PG Tips pyramid bag. Careful, careful with the hot water. Let it brew for the correct amount of time. Add a little milk (blue top). It had to be a certain colour, the tea, a very particular shade of beige. Stir stir stir so that the sugar doesn’t get stuck to the bottom of the mug. That mug. It was huge. You used that mug for over 20 years. I don’t know where it is now, but I hope that someone has it. Careful, careful with dragging the mug over to the edge of the counter. Step off the step, carefully. Two tiny hot hands carrying the mug over to Daddy. “Thank you, princess.” Sometimes a critique. “A little too much milk in this one, babe,” or “Did you put sugar in this or is it all at the bottom?” or if I had spilled a bit on the journey, he’d describe the tea as being “low tide.”

Something awful happens. Make a cup of tea.
Something needs to be sorted out. Let’s all sit down and have a nice cup of tea.
Someone dies. For god’s sake, get that kettle on.
A lovely catch up with an old friend. Tea and biccies.
Bad news. Cuppa char. Good news. Celebratory cuppa.
Big news. Make the tea first then tell us all about it.
Sad news. Sit in silence holding onto your mug of tea for warmth and comfort.
New roommate, new neighbour, new colleague, new boss. Bond over a cup of tea.
Hangover. Drag yourself to the caff for a fry up and a mug of builder’s tea.
Hungry but dinner is ready in an hour. Have a cheeky cup of tea.
Visiting nan and granddad. Call them when you’re 5 minutes away so they can get the mugs out and the kettle boiled.
Work break. Tea and a quick smoke outside.
In hospital. Complain about the weak tea and get friendly with the nurse so she gives you
extra milk and sugar.
Foreign country. Do you have any English tea?
Visiting friends abroad. Bring a box of Twining’s Breakfast tea as a gift but drink it all
yourself during your stay.
Break-up. How about a lovely cup of tea and a slice of cake?
Freezing cold. A cuppa will sort you out.
Heatwave. I don’t care, get that kettle on.
When in doubt: TEA.

After D’s abortion I didn’t know what to do so I just made her cups of tea and held her while she cried; all week, we cried, prayed and drank tea. After I got home from the hospital, D was waiting by the front door with a warm mug of tea for me; she ran me a bath and hid the razor blades.

The only words that father learnt in Polish (my mother’s language)
were kochana and herbata. “Darling” and “tea.” All he ever needed.

Daddy used to write in my birthday cards,
“I love you more than all the tea in China.”
That’s a lot of tea and a lot of love.

I used to resent making my father cups of tea but now I would love nothing more than to hear him say, “Lal, stick the kettle on and make us a cuppa, would ya?” And I would. Happily. So happily.

HLR writes poetry and short prose based on her own experiences with mental illness, grief, trauma and addiction. Her writing has been featured in streetcake, Dear Damsels, In Parentheses, Lunate, Anti-Heroin Chic, and many others. Her story ‘Lasagne’ recently won TSS’s Cambridge Prize for Flash Fiction. HLR was born and raised in north London, and is yet to escape. Read more at www.treacleheart.com or @treacleheartx